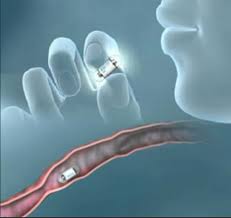 ur doctor has determined that as part of your medical evaluation you should undergo a test known as capsule enteroscopy. This procedure involves swallowing a small capsule (the size of a large vitamin pill or jelly bean). The capsule contains a very small camera which takes pictures of the small bowel, as it passes naturally through your digestive system. The images are transmitted to sensors placed on your abdomen and the images taken are saved to a small recording device that is worn on a strap from your shoulder. The capsule has a battery life of up to 14 hours – after the test it will pass out in bowel movement and does not need to be recovered.

Capsule enteroscopy is covered by a Medicare rebate for the investigation of low blood count (anaemia) or bleeding if a Gastroscopy and Colonoscopy have already been performed. A rebate also applies for the evaluation of Peutz-Jeghers Syndrome (where polyps occur in the small intestine). Use of the procedure to assess other gut conditions may be considered after consultation with the Gastroenterologist but may not be covered by a Medicare rebate.

The procedure is usually arranged after a consultation at our rooms. It can be done as a day-case procedure and there is no anaesthetic involved. You may leave the hospital after swallowing the capsule and the recording set up is completed and you can drive and do other daily activities as usual. Our nurse will ask you to return later in the day (usually 8 hours later) at which time the data recorder will be removed and the information will be downloaded for review.